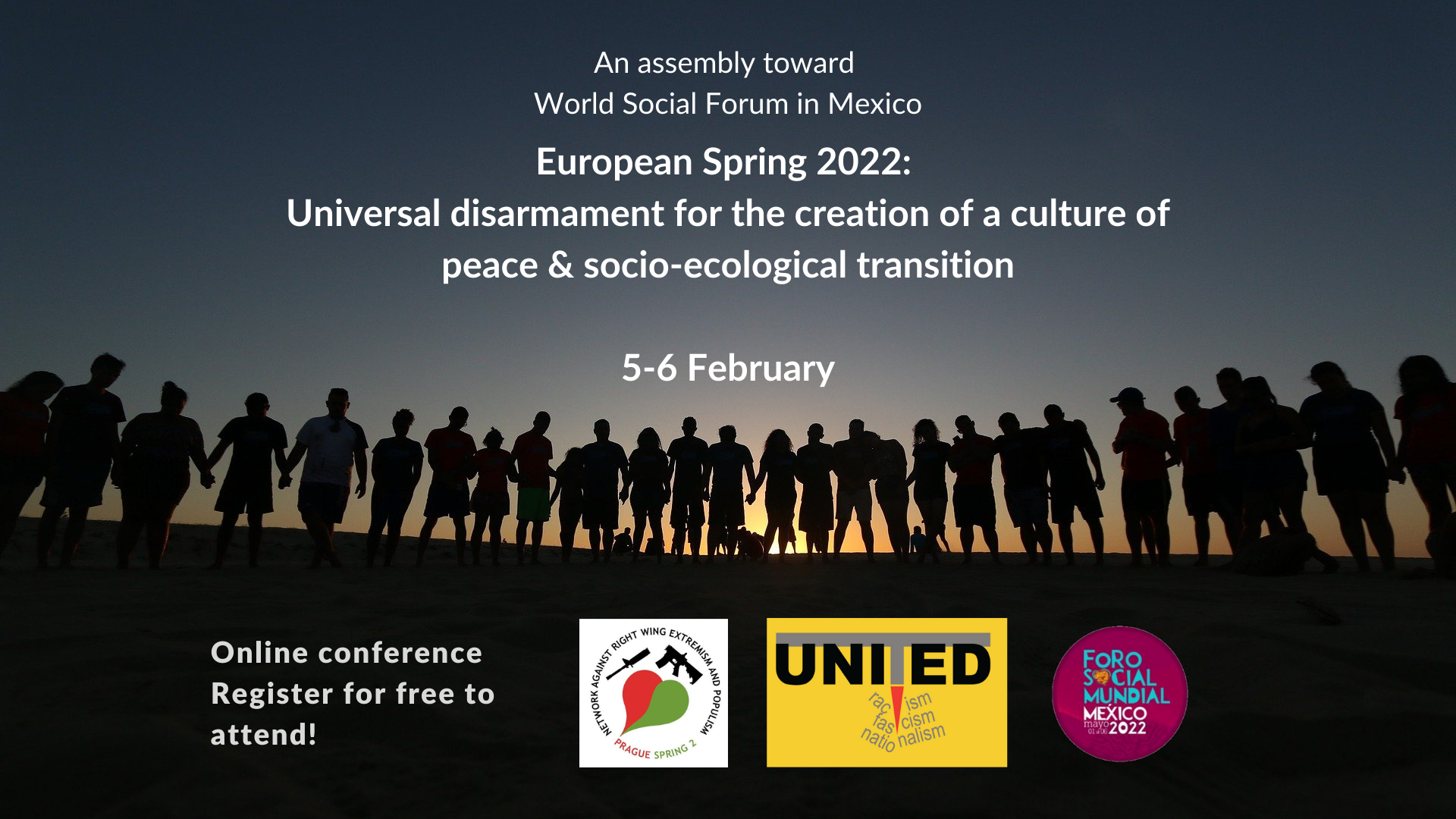 An assembly toward World Social Forum in Mexico

On the 5th and the 6th of February, UNITED for Intercultural Action is co-organising the European Spring conference 2022. The theme for the event is “Universal disarmament for the creation of a culture of peace & socio-ecological transition”.

The event will have four interesting sessions:

Sessions will be recorded, live-streamed and moderated.

Only registered participants get the required link and password.

We recommend you to prepare for an online Zoom conference with a headphone and ‘good enough’ internet access.

Register for the conference through the form below. If you first want to read more detailed descriptions of the sessions or about the background of this conference, scroll down on this page, below the form.

This form helps you to get access to our online Conference. In case a question is not applicable for you, pls write n.a.!

Detailed overview of the sessions

Session 1: Global disarmament and way out from the new Cold War

Now more than ever, the necessity of global disarmament is urgent in order to avoid that modern weapons could affect civilians and the global environment in the framework of the new Cold War.

What are the best strategies to achieve this goal? How can the international civil society be involved in this process?

The international community as a whole has the duty to dialogue in order to avoid apocalyptic consequences for all.

Session 2: Stop repression in the West and in the East

In the context of the New Cold War, the internal political repression has significantly increased, both in the Eastern and in the Western bloc. Political actors who in whatever way criticizes the policies of the government and, in general, the geo-political placement of the country have been highly persecuted through unequal legal trials and unfair accusations. To face this situation, it is fundamental to find possible ways to communicate and cooperate between pro-peace-building groups and initiatives in the West and in the East to oppose the political repression

This session includes an introduction into the field of environmental peace-building and all the consequences a universal disarmament would potentially have for the environment.

The process of disarmament has to be carefully guided by the international community to avoid affecting the peace-building process and the construction of sustainable societies over the world.

What is a culture of peace? How could it be established or is it pure wishful thinking?

This session will give a thorough insight into migration caused by wars and corporations with the aim of making short term profit or concentrating power in the hands of the state. It aims at finding international tools to deal with this sort of humanitarian crises and ways to avoid the consequences of geopolitical tensions and conflicts being paid by civilians.

The international community has to solve this problem in order to achieve a social and ecological transition in all parts of the world.

Background of the conference

After the fall of the Soviet Union and consequently the end of the Cold War, the issues related to global disarmament became more dangerous. Indeed, the number of local and unconventional conflicts has not decreased. The risks of misuse against international law of destructive weapons has increased and this is more and more worrying for the peace-building process that tries to build a safe and sustainable global environment.

The issues related to the disarmament are not only a geopolitical security issue, but they also strongly affect the life of countless individuals. Indeed, the lack of disarmament takes resources needed for a social and ecological just transition, such as democratic and stable institutions or guaranteeing health, a safe life to every human being and an end to environmental destruction. For this reason, it is impossible to imagine a worldwide sustainable path without a global disarmament.

Even today, recent rising tensions between the world’s nations have proven once more that peace is not self-evident and it takes a lot of diplomatic effort to secure it. Such diplomatic precision work is indispensable during negotiations about a new global atomic deal, for example.

In general, many other local conflicts stress the importance of universal disarmament for the creation of a culture of peace.

All these different situations lead to various socio-ecological crises spread over the globe:

To open a way to overcoming these crises, ending the wars and launching global disarmament, an international movement able to promote systemic solutions, including necessary political, social and ecological agendas, is needed.