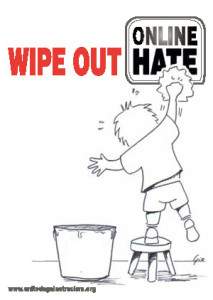 WIPE OUT HATE Stop hate speech Online International Day Against Fascism and Antisemitism – 9 November 2013 More than 200 coordinated actions are organised by grass-roots organisations and different local groups in 43 European countries. These local actions are united under the common slogan: “WIPE OUT HATE”

9 November 2013 International Day Against Fascism and Antisemitism
JOIN! – find out how to join the campaign
INFORM! – us about your activity
ORDER! – UNITED can send you free campaign posters
LIKE! – and follow the campaign on facebook
CHECK! – the campaign website for the event map

From 4th – 8th May more than 80 representatives from 36 European countries participated in the UNITED conference, “Dissolving barriers” in Rieti, Italy.

On Sunday, April 24th 2002, France has known the most terrifying evening of its afterwar story: the Extreme Right wing, through its representative, Jean Marie Le Pen, has reached the second turn of the Presidential elections. No party, no media, no Organisation, rightist or leftist, has doubted that the most xenophobic and racist party would… Read more »

Here we are all back to our everyday work and fight in our different fields after our common share in Göteborg from June 8th to the 12th 2001. Hopefully our enriching discussions and plan of action will not stay voiceless and with no future. That is why, in the workshop on “fighting discriminations against minorities”,… Read more »